Numbers. Day 114, Towns For The Levites And Cities Of Refuge

The Levites won't inherit territories within the promised land in the same way as the other tribes. Instead they will be given towns located within the territories of the other tribes. Their lives will primarily revolve around service at the tabernacle, although they will be allowed to own livestock. Their main job won't be to work as cattle ranchers or sheepherders but pastures will be allotted to them for the use of their livestock.

After looking at the properties given to the Levites we will learn that there are some cities within the promised land to be set aside as cities of refuge to which persons accused of murder may flee until their cases can be heard. This is intended to help prevent vigilante justice from being carried out by the relatives of the deceased person.

"On the plains of Moab by the Jordan across from Jericho, the Lord said to Moses, 'Command the Israelites to give the Levites towns to live in from the inheritance the Israelites will possess. And give them pasturelands around the towns. Then they will have towns to live in and pasturelands for all the cattle they own and all their other animals.'" (Numbers 35:1-3) The Lord had said to the Levites through Aaron the high priest, "You will have no inheritance in their land, nor will you have any share among them; I am your share and your inheritance among the Israelites." (Numbers 18:20) Though the Levites won't be given a territory for their tribe, they must have places to live, and some of the towns will be set aside for this along with the pastureland right outside the towns. The Levites are family men just like men of other tribes. They have wives and children and they need places to call home. Those places will be in the cities of Canaan. 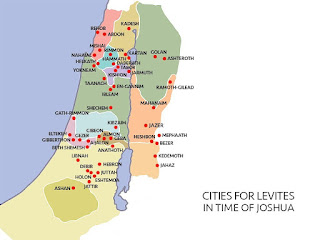 Some of these towns will also be used as cities of refuge. "Six of the towns you give the Levites will be cities of refuge, to which a person who has killed someone may flee." (Numbers 35:6a) The accused person will reside in a city of refuge until his trial comes up. At trial it will be determined whether he intentionally caused the death of another person or whether the death was caused accidentally. In our own courts today we also have to determine such things, and even when it's proven that the death was caused on purpose, the sentence varies according to whether the crime was premeditated or whether it was a crime of passion committed in a sudden rage or whether it was committed while the person was insane/temporarily insane. There's also another type of murder which, although not necessarily intentional, is treated much like premeditated murder. For example, a person who enters a convenience store with a gun in order to rob the store may not intend to shoot anyone while there but he may end up firing his weapon in a panic or firing his weapon because the store owner or a customer pulls a gun for self defense. Another example would be if someone is driving drunk and causes an accident that results in the death of another person; the drunk person didn't intend to kill anyone but while committing the crime of driving under the influence he caused the death of someone else.
If a person in Israel is accused of causing the death of another person, he may reside in a city of refuge until his case comes to trial. It could turn out at trial that, although his actions resulted in someone else's death, his actions weren't of a criminal nature. He didn't intend to hurt anyone and wasn't engaged in actions that broke the law when the death occurred. This is why it's important that he have a city of refuge to stay in while he waits for his case to come up. Otherwise the relatives of the person who died might come and take vengeance upon him and in doing so would be killing an innocent man. If he is found innocent at trial then the dead person's relatives are to accept the verdict and leave him alone.
The Levites will be given forty-eight cities in all and six of those are to be designated as cities of refuge. "In addition, give them forty-two other towns. In all you must give the Levites forty-eight towns, together with their pasturelands. The towns you give the Levites from the land the Israelites possess are to be given in proportion to the inheritance of each tribe: Take many towns from a tribe that has many, but few from one that has few." (Numbers 35:6b-8) Larger territories will have more Levite cities and smaller territories will have fewer Levite cities.
Join us tomorrow as we take a look at examples of murder cases that will come to trial and how they are to be judged.