The Exodus. Day 93, The Ark Of The Covenant, Part Two

The Lord has explained to Moses how to construct the container known as the Ark of the Covenant. Once its bottom and sides have been made, the Lord says, "Then put in the ark the tablets of the covenant law, which I will give you. Make an atonement cover of pure gold---two and a half cubits long and a cubit and a half wide." (Exodus 25:16-17)

Between the tablets of the covenant law lies the "capporeth" or "covering" or "concealment". This word, when used in relation to the Ark of the Covenant, is usually rendered as "atonement cover" or "mercy seat". The tablets are to be enclosed within the ark on every side but special things are going to take place in regard to the atonement cover.

The atonement cover is where the blood of the sacrifice on the yearly Day of Atonement (Yom Kippur) will be sprinkled by the high priest of Israel. This blood would "cover" or "conceal" the tablets within from the sight of God. The blood was accepted by God as an atoning sacrifice for the people's inability to perfectly keep the commandments written on the tablets. God has perfectly kept His side of the covenant, but every human being has sinned and fallen short. (Romans 3:23) Because we sin and fall short, we need something to cover and atone for our sins. When God looked down from heaven on the Day of Atonement onto the box that held the tablets of the covenant, He saw the blood, not man's failures! Because every human being has sinned against God, and because without the shedding of blood there is no remission for sins (Hebrews 9:22), and because God is willing to accept a substitutionary death in place of the spiritual death of man, when He saw the blood on the mercy seat He considered the broken laws atoned for. He accepted the faith of the people in place of their inability to fully obey His words.

Every year while the Ark of the Covenant was housed within the tabernacle and later within the temple, the high priest had to go into the inner room and sprinkle the blood of the sacrifice on the mercy seat. The author of Hebrews said that these same sacrifices, made year after year, could never "make perfect those who draw near to worship. Otherwise, would they have not stopped being offered? For the worshipers would have been cleansed once for all, and would no longer have felt guilty for their sins. But those sacrifices are an annual reminder of sins. It is impossible for the blood of bulls and goats to take away sins." (Hebrews 10:1b-4)

All these annual sacrifices did was delay judgment (sometimes referred to as a "rolling back" of sins) for another year. These sacrifices were not capable of making a person righteous in the eyes of God forever. These sacrifices were symbolic of what was to come, which was the shedding of the blood of God's own Son, the perfect and spotless Lamb of God who takes away the sins of the world. (John 1:29) When Christ shed His blood on the cross, it was enough to cover for all time the sins of those who put their trust in Him. When Christ shed His blood on the cross, He didn't carry the blood into an earthly temple and sprinkle it on the mercy seat of the Ark of the Covenant. He carried the blood into the very presence of Almighty God, into the inner room of the temple in heaven, and sprinkled it on the mercy seat there. (Hebrews 9:11-15,23-26) The objects the Lord is telling the Israelites to make in the book of Exodus are copies of things that exist in heaven, according to Hebrews 9:23. There is a temple in heaven, and an ark, and a mercy seat. These are made not by human hands but by the hands of God, and if you have trusted in Christ as your Savior, then the blood He sprinkled on the mercy seat of heaven is what God sees when He looks down upon you. He doesn't see your sin and shame. He doesn't see your faults and failures. Something is in between God and the evidence of the laws and commandments you have broken---the blood of Christ! When God looks at you He sees the blood of His dear Son whom you've trusted as your Savior and Redeemer.

Later in our Old Testament study we will look into practices of the Day of Atonement more closely, but first the Bible describes the atonement cover in more detail and gives us some information about another amazing thing that takes place on the mercy seat. "And make two cherubim of hammered gold at the ends of the cover. Make one cherub on one end and the second cherub on the other; make the cherubim of one piece with the cover, at the two ends. The cherubim are to have their wings spread upward, overshadowing the cover with them. The cherubim are to face the cover, looking toward the cover. Place the cover on top of the ark and put in the ark the tablets of the covenant law that I will give you." (Exodus 25:18-21) The Lord repeats His instruction that the tablets are to reside within the ark. Of course they would have to be placed inside it before the cover could be affixed, even though in verses 18-21 the Lord mentions the placing of the cover before He mentions the tablets being inside. I think perhaps these things are mentioned in this order because the cherubim are to be looking down toward the cover and toward the tablets underneath.

We don't know exactly what a cherubim looks like, but apparently Moses and the Israelites understood what form they should take, or perhaps God described their appearance in detail while Moses was on the mountain with Him. They are usually depicted as angelic beings, having a humanoid shape, on their knees on the lid of the ark with their faces bowed down toward the lid and their wings overshadowing the lid. I'll post an example below for anyone who may never have seen the cherubim depicted in art or on film. 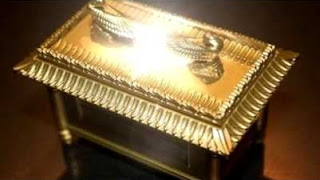 We can't know for certain if this is what the cherubim looked like but this photo gives us something to go by while trying to picture the ark in our minds.

Do you notice the glow on the mercy seat in between the wings of the cherubim? This symbolizes the presence of God. "There, above the cover between the two cherubim that are over the ark of the covenant law, I will meet with you and give you all My commands for the Israelites." (Exodus 25:22) The glory of the Lord is going to visibly appear between the two cherubim. This is what the Jewish rabbis named the "shekinah"---"the glory of the divine presence, conventionally represented as light". This word is derived from the root word "shakan" which means "to reside, to stay, to dwell". Whenever the glory of the Lord appeared on the mercy seat of the Ark of the Covenant, it was a visible display of His presence with the people. It was the proof that He was indeed doing what He told Moses He would do when the sanctuary was made: "I will dwell among them". (Exodus 25:8a)

Now that Christ has come and offered Himself for our sins, we experience the glory of the Lord in a different way, by the indwelling of the Holy Spirit. "The Spirit himself testifies with our spirit that we are God's children." (Romans 8:16) We don't have to enter a temple and gaze upon the Ark of the Covenant to experience God's presence with us; He is present with us at all times. He has made His dwelling place in the heart of all those who have put their faith in Christ. This is far better! The practices of the Old Covenant were a foreshadowing of the things to come under the New Testament. The yearly sacrifices were replaced by a perfect and eternal sacrifice. We don't have to visit a specific location to be in the presence of God, for our bodies have become the temple of the Holy Spirit. (1 Corinthians 1:19) His glory is within us---teaching and guiding us, comforting us, filling us with power and strength.